Charities and the £1.7 billion mobile donation opportunityWhen it comes to the charity sector, most of us have probably received some over zealous marketing communications at some point, from a…

When it comes to the charity sector, most of us have probably received some over zealous marketing communications at some point, from a charity trying to squeeze further donations out of those they know are already sympathetic to their cause.

New research released today from Fonix and OnePoll, has found that when it comes to donating to charity, concerns over trust and harassment clearly influence the donation channels that consumers use yet there is a £1.7bn carrier billing donation opportunity.

When asked which channels consumers usually prefer using to make a donation in response to a charity appeal either in print or on TV/radio, the results were as follows: 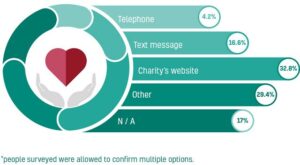 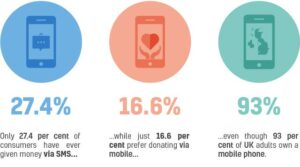 Although the volume of text donations is increasing eight per cent year on year, there’s still more work to be done by both charities and service providers to drive more confidence and unlock the full potential of mobile.

Of those that haven’t yet donated via mobile, more than half of respondents fear that if they do then their mobile number will be shared with third-parties, resulting in them receiving unsolicited sales and marketing calls. The other reasons include: 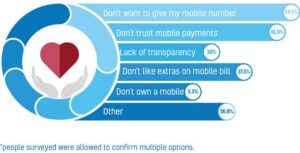 Like the charity sector, the broadcast sector has had to overcome its own consumer trust issues in recent years around paid for interactive services such as voting and competitions. However, TV and radio services have adapted to embrace the channels that users enjoy interacting with and now, for example, attract up to 80 per cent of interactions via text message, despite alternative and free routes also being available.

It’s clear that consumers love interacting with organisations via mobile, but charities need to approach mobile with skill and build trust by taking a more edited approach to customer relationship best practice. Those who do donate via text message love the convenience and simplicity that the channel offers, but that’s not the only reason these consumers prefer it: 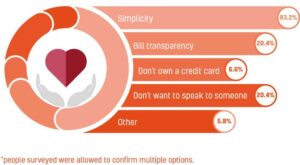 It’s clear that the charity sector is suffering from consumer trust issues due to the actions by some, but the few that use harassing and exploitive practices are actually impacting their long term relationships with supporters.

Our research found that consumers now want the choice for less direct contact with charities even if they’ve chosen to donate. This makes ongoing CRM a real challenge. When asked how they would prefer to receive information from a charity they support with regular donations, the response was unquestionably in favour of more passive platforms like email or post: 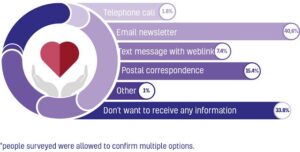 It is immediately evident from the size of the mobile billing market for charity donations that mobile is a channel which has an increasing appeal with consumers — the majority of which is untapped.

The kicker however is that charities need to approach mobile with skill and build trust. That starts with transparency in the donation process and planning the appropriate levels of post donation CRM.

When executed correctly, mobile billing can be the most effective and frictionless way of gathering donations and engaging with consumers at scale yet there is a danger that consumers suffer charity fatigue that changes their experience and perception of that organisation.